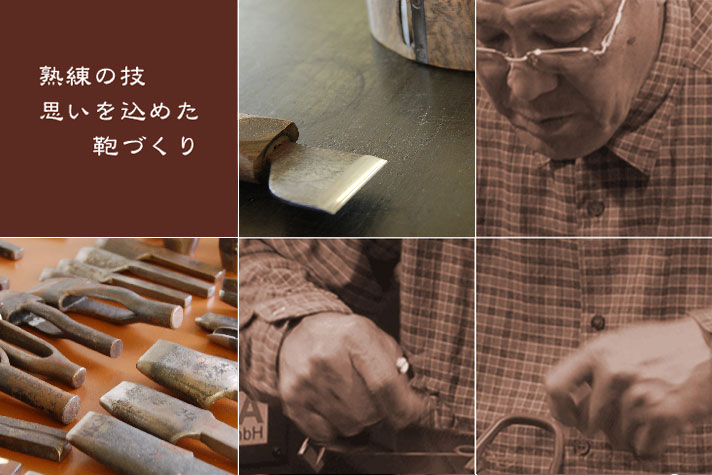 Spirit of a Craftsman: The History of Eizo Itagaki

"Never Compromise! Never imitate! Use every inch of the leather!
Think clearly! "
These bedrock fundamentals of leather craftsmanship remain unchanged by time.
Self-reliant and unswayed by the passage of time, walking forward with conviction upon one's own path,
such is the nature of the spirit of a craftsman.

The mid-40's following the war was a time when craftsmen and customers
bartered face to face. As a consequence of
such a direct relationship, the craftsman worked with a high degree of responsibility and strove for perfection in order to instill confidence in his customers.
A solid mutual trust between the two was imperative.

From Young Apprentice to Breakout Craftsman

At the age of 15, Eizo Itagaki began his apprenticeship under Mr. Rentaro Yagi, a craftsman in downtown Tokyo
This was an era of direct face to face contact between customers and craftsmen and most customers were the residents of downtown Tokyo.
Experienced craftsmen blended traditional techniques with new technology to produce products of the highest quality and caliber.
This was the last, and arguably the best, era of traditional leathercraft in Japan and it was in this era that itagaki learned his craft.

The trend of mass production which took over Japan in the 60s ushered an era of mass consumption.
Hand-crafted products of the highest quality made by traditional means
continued to enjoy favor and popularity for a time as the economy was flush and people spent generously.
However, as quantity gradually began to transcend quality in the mind of the customer, so too did their priorities shift. Technology began to evolve in the direction of maximizing quantity rather than improving quality
and
the spirit of artistic perfection gradually waned. Over time the tradition of leather craft began to rapidly fade, and the craftsmen who strove to keep it alive all but disappeared.

Itagaki emerged as a pioneer amongst the few who remained.
He joined Samsonite Corporation, an industry leader in the manufacturing of mass-produced suitcases.
As a member of the development team, he was instrumental in Samsonite's robust design, which earned it the title of "unbreakable"
and also added a caster at its base which allowed it to be wheeled rather than carried, a breakthrough innovation at the time.
This remarkable design was a hit with customers and Samsonite products began flying off the shelves.

A New Vision Born from Experience

It was during this time, a time of unprecedented economic growth which catapulted Japan into becoming one of the world's wealthiest nations,
a time when Itagaki was riding the peak of his own career wave, that he first envisioned founding his own company.
A journey that began with a glimpse into the golden age of leathercraft, where craftsmen earned their livelihood solely through the practice of their craft,
to a career in which Itagaki emerged as an industry leader in an era of mass production and rapid economic growth, that timeless refrain :
"Self-reliant and unswayed by the passage of time, walking forward with conviction upon one's own path,
such is the nature of the spirit of a craftsman", had always been his guiding philosophy.
It was a philosophy that was finally embodied in the establishment of "Itagaki Co. Ltd."

Never Imitate:   Create a unique vision. Keep your finger on the pulse.
Never Rush:     Invest the time and effort into finding the best materials and technology and crafting the highest quality products.
Stay Self-Reliant: Craft it yourself, sell it yourself, take responsibility for your product from start to finish.

The craftsman is responsible not only for the creating, but must also put himself out in the market, must grasp trends,
must procure and care for the material, must use cutting edge technology knowledgeably and responsibly to suit his own purpose.
To build relationships built on mutual trust facilitated by face to face interaction between craftsman and consumer.
These are the founding principles by which Itagaki's timeless products are crafted.

Eizo Itagaki, Company Founder and President
At the age of 15, I began my apprenticeship under a leather craftsman in downtown Tokyo named "Rentaro Yagi"
I have been making bags ever since for the past 61 years.
I moved to Hokkaido in 1976. Itagaki was founded in 1982.
Today, by bringing together
the "spirit of a craftsman" and leading edge technologies, Itagaki continues to produce leather bags of the highest quality.